Yesterday, I’d put up a picture of the female Ground Skimmer. Turns out that the male skimmer is of a completely different colour, a vivid blue instead of the mottled yellow.

Male spiders are tiny and usually get their heads eaten off. I guess male dragonflies have a slightly better deal.

END_OF_DOCUMENT_TOKEN_TO_BE_REPLACED

Blue is a masculine colour.

Thought I’d relieve that spider overload with another dragonfly. 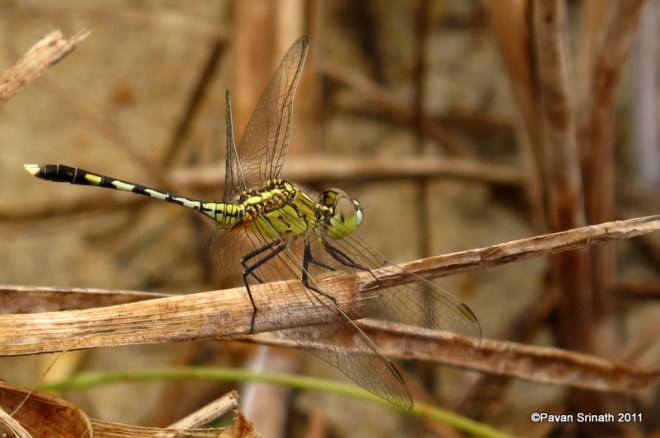 This is again on the beachside, adjacent to those Prosopis shrubs that I was talking about in the previous post. The beach was abuzz with dragonflies, and of many different varieties at that.

This is a female Indian Ground Skimmer, or the Diplacodes trivialis. A hat-tip to the Nerdy Birders for ID help, an excellent website on the birds, butterflies and dragonflies of India.

END_OF_DOCUMENT_TOKEN_TO_BE_REPLACED

The Gulf of Mannar coast of Tamil Nadu is a rather interesting place, even outside of all the critter pics from there that I’ve been putting up. Falling largely in the shadow of the Western Ghats, the whole region is quite arid in nature.

Back in the ’70s and ’80s, mad pamphleteers and “development experts” spearheaded this massive effort to promote seeding of Prosopis juliflora, a large, thorny and wholly unpleasant shrub. Hailing it as the saviour of our deserts and the provider of alternative livelihoods, Prosopis was promoted with reckless abandon, touted as a great source for charcoal, firewood and all things wonderful.

Today, Prosopis is a highly invasive species that’s spreading everywhere. The shrub (I say shrub, but really, they’re these low-slung trees that form a vast and impregnable network of branches that can spread across quite an area,) cannot be eaten by livestock of any stripe.

Such trivial things can never stop spiders, though. On Prosopis bushes by the sea in Keelamundal on the Ramanathapuram coast, I found the highest density of spiders anywhere, thus far. On most bushes, I could find more than multiple spiders in every cubic foot of space. To get one on my camera, I had to be really careful in not brushing through the webs of several others.

In the picture below, you can see a juvenile female Argiope in focus, an adult female at the bottom, and two diminuitive males of the same species out of focus on either side.

And if you take my word for it, there were some half a dozen more spiders to my right, some below the picture and several all around. Who knows, maybe even Cross spiders are as rampantly invasive as the shrubs that harbour them.

END_OF_DOCUMENT_TOKEN_TO_BE_REPLACED

Here there be spiders.

It’s a bit odd that I am posting my first picture of a Jumping Spider (family Salticidae) here on TDC today. This is a snap from back in November, that I had also shared earlier on Facebook.

Anyhou, jumping spiders are among my favourite critters. They are a bit hard to capture on my mid-level camera, in spite of their apparent curiosity and doe-eyed innocence. They’re tiny, they’re twitchy and boy are they adorable.

I found this particular critter on the trunk of a cocunut tree in my backyard. I’ve only identified it recently as a Grey Wall Jumper or the Menemerus bivittatus.

Don’t you dare discriminate against the four eyed. Or the six or the eight. They can have their cheeseburgers too.

END_OF_DOCUMENT_TOKEN_TO_BE_REPLACED

Eeep. I announce that starting this week, new posts will be up Sunday through Friday nights, and then Sunday passes without anything new here.

Mea culpa, visitors, mea maxima culpa. I thought I’d nap at 7 in the evening yesterday, and woke up at 5.30am today.

As an apology, I give you today’s Garfield from Go Comics (with a hat-tip to Suresh):

Hey folks. TDC’s traffic analytics shows that people don’t really like visiting blogs over the weekends (D’oh!). I do get a lot of hits on Mondays though, and by then the post is usually 2 days stale.

From next week onwards, expect new posts Sunday through Thursday night. (This way, you know, I can also go out on Friday nights and have a life and all.)

However, I don’t want any of you to trundle off disappointed that all you got tonight were some crummy words and flimsy justifications for my laziness tonight, when you came looking for a new picture.

So enjoy some budgies!

END_OF_DOCUMENT_TOKEN_TO_BE_REPLACED

A lot of critters profiled on this blog have been from my workplace near Bommasandra, on the outskirts of Bangalore. We have a lovely little campus, with over two acres of area and less than a third of it built upon. The rest is filled with trees, lawns, and even little vegetable patches. Perfect for spotting critters of all shapes and sizes.

The problem though, is that we are located bang in the middle of an industrial area. Disturbingly frequent bad smells, sirens going off in the distance, and overloaded trucks always plying on the main road are the most routinely experienced consequences of the obviously well-regulated industrial area.

Behind our campus is a button factory. You know, an entire factory dedicated to making your teeny tiny buttons. Cute, right? NOT. Once every six months or so, I think they finish manufacturing large numbers of buttons and get them ready for the last round of processes: polishing. They polish the buttons by removing fine layers of plastic off the buttons… and into the air.

They stick on to everything. They get indoors, they mix in with the soil everywhere, all surfaces are spotted white… and they stick on to spider webs.

A spider’s web (especially when it’s an orb web, like the Argiope’s, above) works as a flytrap only because it’s all but *invisible* to flies and other insects. Once you stick big shiny wafers of plastic on the web, it kinda stops working.

Not all spiders go down without a fight though. Some Cyclosa spiders – this one likely being the Cyclosa spirifera (getting their first feature on TDC today) use the plastic to their advantage instead! Cyclosa spiders have been known to use litter, the remains of insects, dirt and just about anything to create blobs of gunk on their web, which act as decoys to the real spider should a predator attack.

The Cyclosa here promptly grabbed all the plastic stuck to its web and pulled it into the centre, as shown below, leaving the rest of its web remarkably clean.

What could’ve starved the spider to death was instead used to improve its camouflage! All hail the mighty spider.

END_OF_DOCUMENT_TOKEN_TO_BE_REPLACED

You live and you learn.

The Daily Critter. Good photographs and bad puns since May 2011.

END_OF_DOCUMENT_TOKEN_TO_BE_REPLACED

Mirror, mirror on the wall, who’s the suckiest of them all?

Back in January, I had gone on a little hike with some friends to the Bilikal Rangaswamy Betta, just south of Bangalore. On top of the hill is a stretch of exposed rock, which forms a bright cliff face, in start contrast to the green hill below, thus giving the hill its name.

On the top near a little tank of water, a roaring mass of bees were buzzing around. At first everyone was wary, but the majority of the bees just seemed to be sitting or moving on the wet rock, completely ignoring our presence. So I decided to wing it, and went in and sat down in the middle of them, on a dry patch of rock. 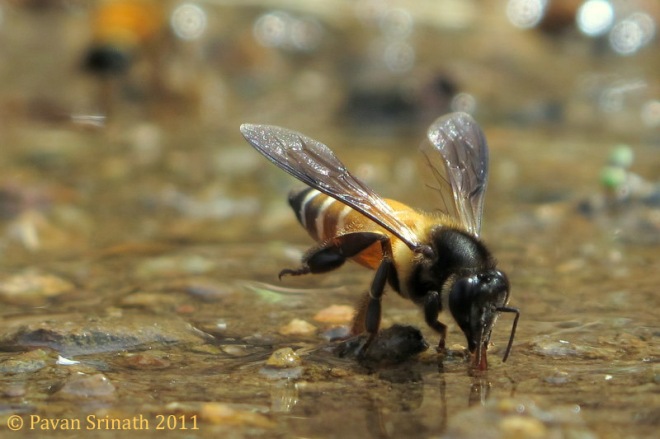 And so I was able to get this picture. It turned out that all the bees were drinking water! I was not aware that rehydration is a communal process amongst bees. You can see the proboscis jutting out and sucking water in. In case you’ve forgotten, remember – bees sting from the other end, there’s no reason to fear this one.

If I’m not mistaken, these were Giant Honey Bees, the Apis dorsata dorsata.

END_OF_DOCUMENT_TOKEN_TO_BE_REPLACED

Have a little drink with me.

I’d shared pictures of the Green Lynx Spider, the Peucetia viridana in earlier weeks. The wee spider that was braving the storm then is quickly growing up, shedding her cuticle again over the weekend.

Now, she truly is the Queen of Thorns.

END_OF_DOCUMENT_TOKEN_TO_BE_REPLACED

The Queen of Thorns.
The Daily Critter
Blog at WordPress.com.